*** I broke this up into two parts because there are a LOT of photos and besides, I know that a couple of you have been antici…..pating the next installment ***

We got up early – too early. I hadn’t slept well the previous night: the bed wasn’t very comfortable, there were some random fireworks at midnight, and apparently the city cleans the streets at 6 a.m. with a gas-powered leaf blower. Regardless, I was looking forward to our upcoming explorations!

Breakfast at the hotel was a simple but tasty croissant and then we were on our way. I had read that there was no food in the park itself, but you could bring a picnic lunch with you. As there is no re-entry, I thought that it was worth the time to find something to bring with us to eat later. Last night I had spied a shop near the park entrance that had some sandwiches on display, and we stopped there now to pick something out. The guy behind the counter was cheerful and happily put together a couple of sandwiches for us.

I found out later that the park “Parco Archeologico di Pompei” actually had three entrances. The one closest to us (Porto Anfiteatro) was not the main entrance, but it was not a small entrance, either. We walked up to the gate, bought our tickets for the day (15.00€) and entered the park. 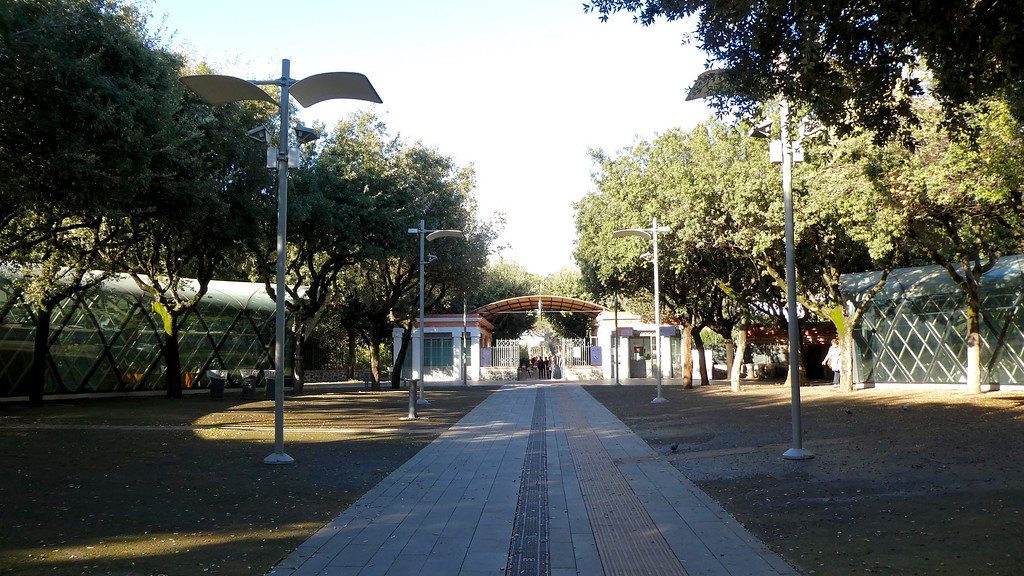 Most of my research indicated that I should hire a guide. Signage was limited within the park and there was so much background information to know in order to fully appreciate what we were seeing. This was my plan, even though I wasn’t keen on joining a group of a dozen people being herded through the park. As Dan and I passed through the gates there weren’t many others around. An older man approached us and asked if we wanted a guide. The cost for his services was 95€ for two or three of hours of guidance. He suggested that we could wait for others to enter the park to make for a larger group and therefore bring down the cost. To be honest, if he had struck me as being more outgoing and spontaneous, I would have suggested that just the two of us hire him for a personal tour. Instead we decided not to wait around and just started to explore on our own. It was a Wednesday morning in late November: Dan and I found ourselves practically alone in the park. This was not something that I expected, but was thrilled to see – especially when you consider that every year over 2.6 million people come to visit the park.

A view of the city from the Park 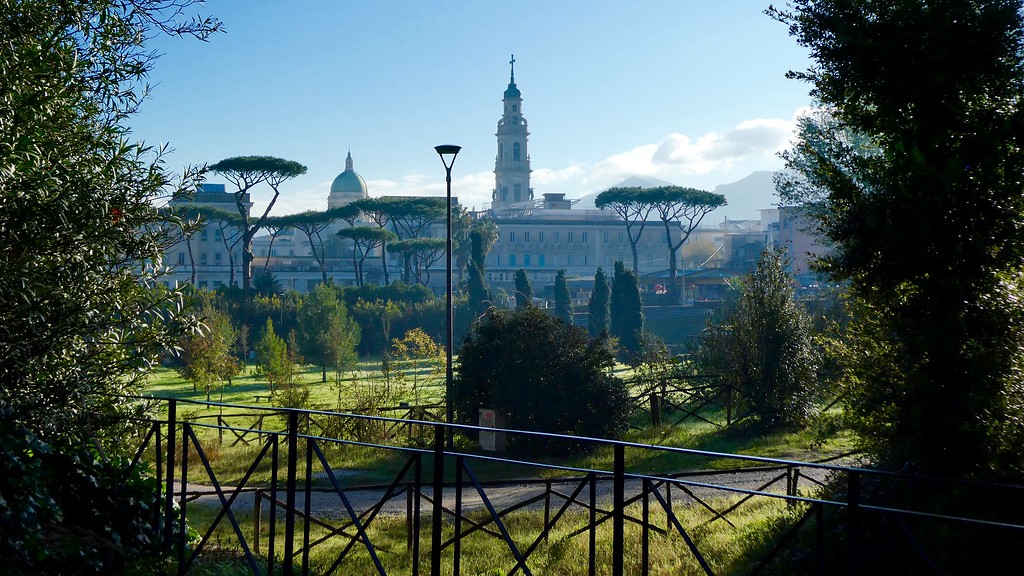 Outside the Porto Anfiteatro (this is the oldest stone building in the world of its kind, dating back to 80 BC.) 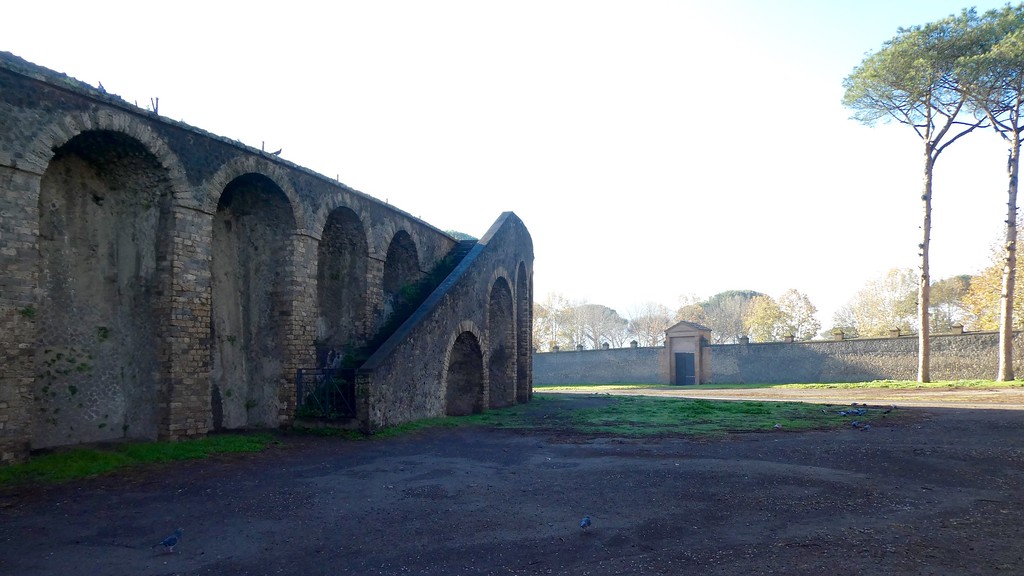 Inside the amphitheatre (Pink Floyd played here in 1972, the first live performance since AD 79!)

When Mt Vesuvius blew in AD 79, the town of Pompeii was already 600 years old. It was an important crossroads, and later, a port town that evolved into a key passage for goods traveling to Rome. But then the local volcano let loose a cloud of hot gases, ash and debris that quickly buried the landscape at its feet. Most people know the story of Pompeii, but if you want to know some more, the wiki page is a great source of more details than I am willing to include here. Because many of the residents at that time were used to the usual temblors that shook the area, not many people evacuated when Mt Vesuvius started to rock and roll on that fateful day. By the time (mere hours) the ash started to fall, it was really too late for anyone left behind. The pyroclastic flows from the eruption can move at 724 km/h (450mph) with temperatures reaching as high as 999°C (1,830°F). This short video gives an incredibly simplistic overview of “that day.”

Just us and the ghosts 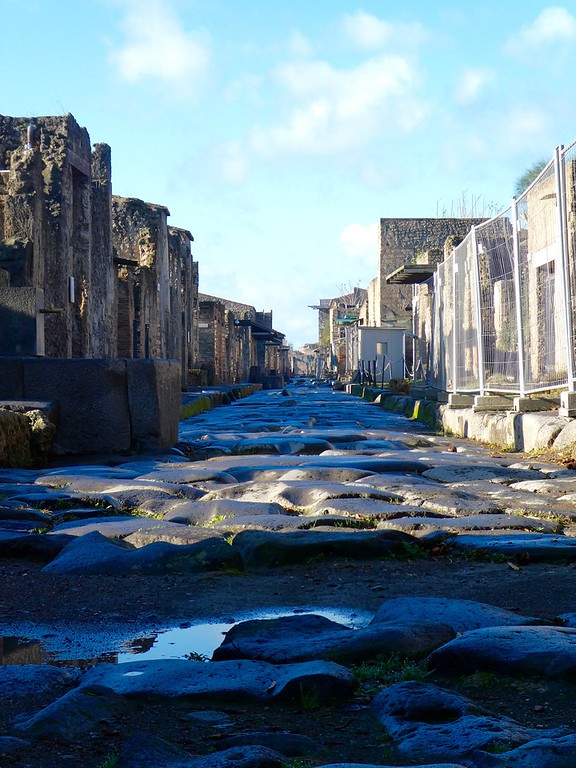 The walled city of Pompeii, at 150-acres, has not been completely excavated, and the areas that have been exposed were in varying degrees of preservation. Some buildings were just plain stone walls, whereas others held elaborate murals and mosaics. Further into the park I overheard a guide describing some of the features of one of the more elaborate houses. She was energetic and interesting to listen to; I was beginning to wonder if we should have gotten a guide after all. 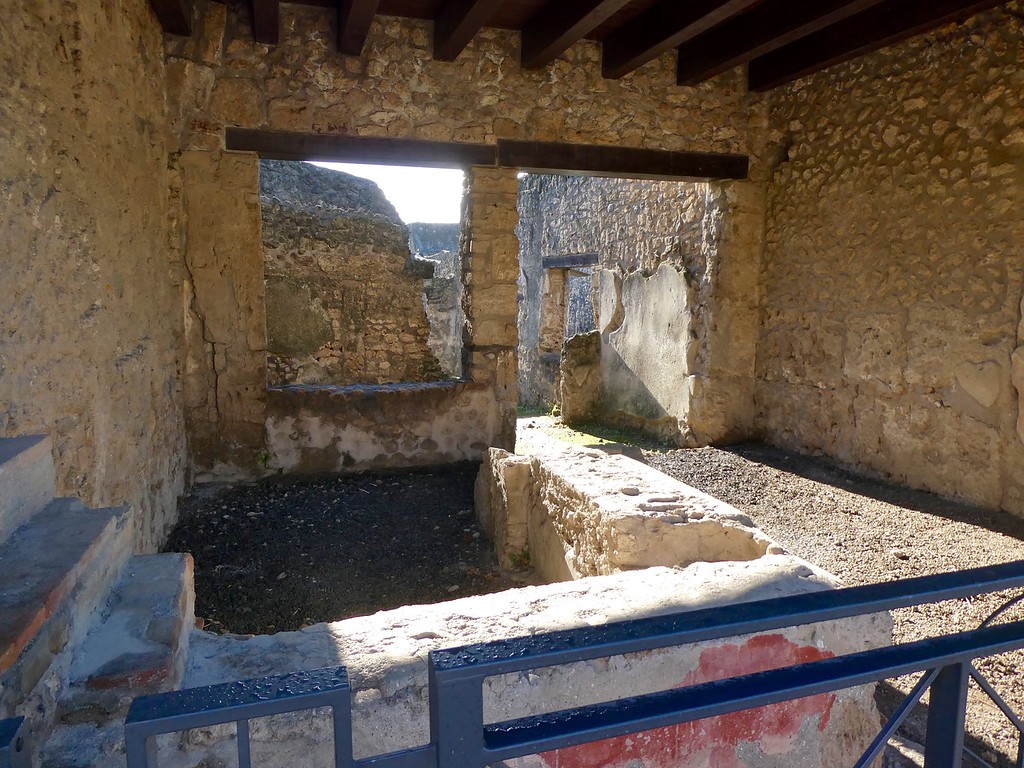 One of the things that I was surprised to learn (by eavesdropping on another guide) was that many Pompeiians did not cook at home. Instead, they ate at what were essentially “food stalls” that lined the streets. There were a number of storefronts that looked like the photos below: holes in a counter to hold containers of food, ready to serve to hungry customers. There were even little holes that fit coins! 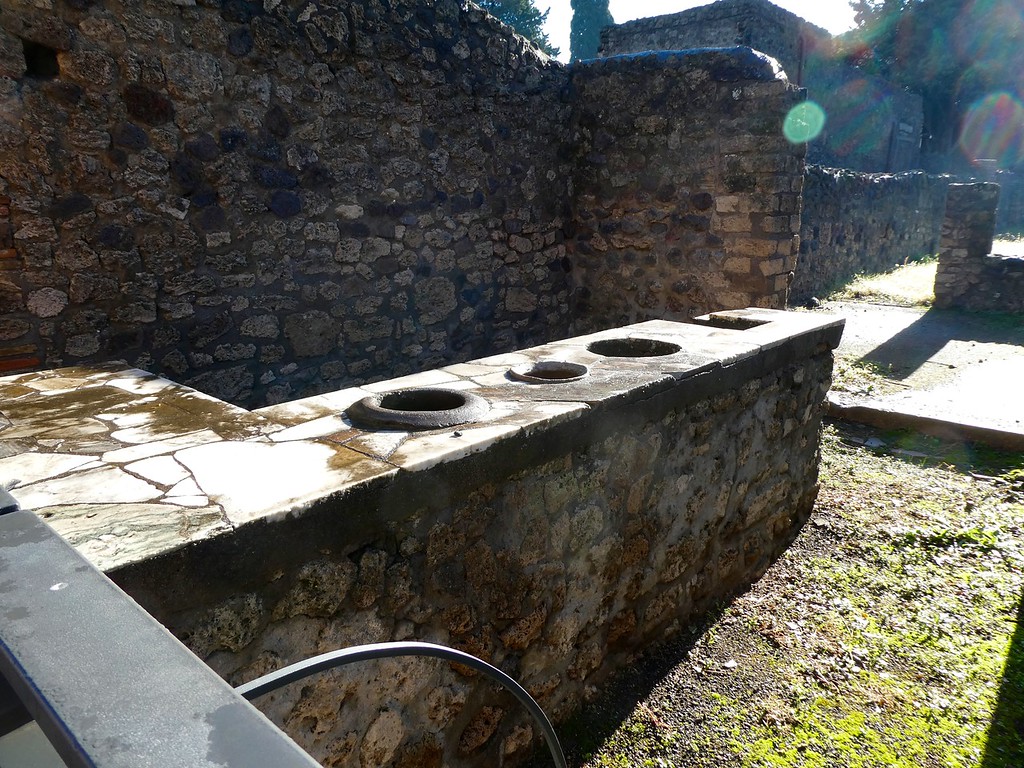 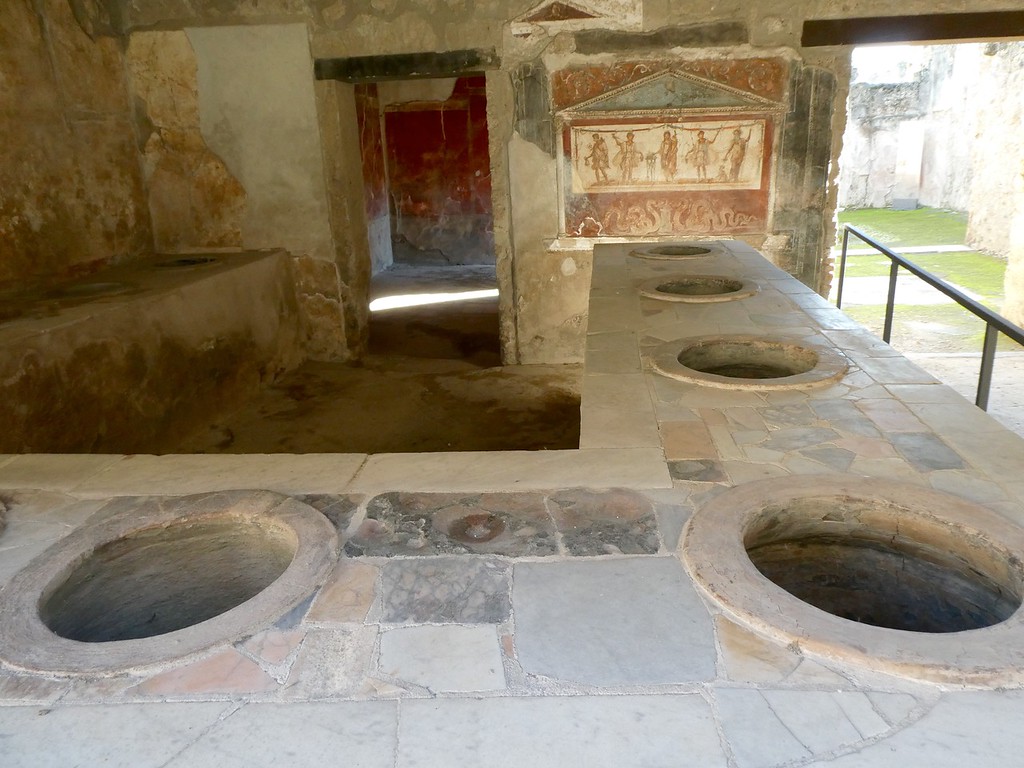 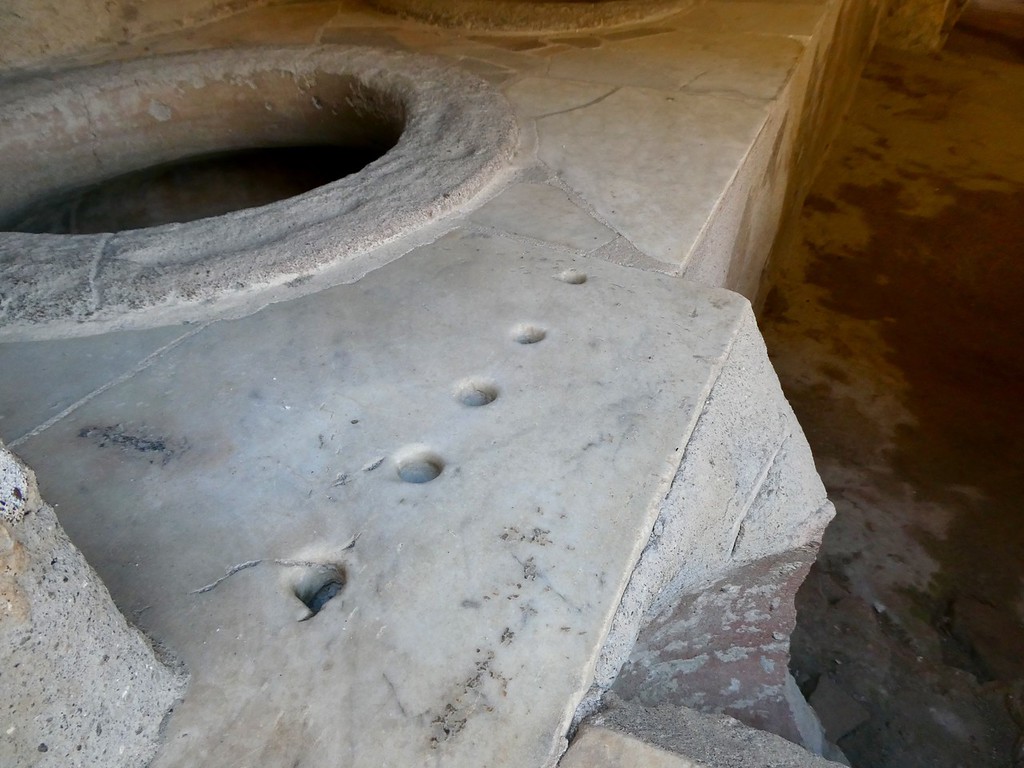 It was the function of the streets to collect the rainwater and channel it out of the city through the walls, or towards the few internal drains, mostly around the Forum. Even when it was not raining, water supplied in part by a viaduct from the city of Napoli (25 km away) spewed into the roadways from the continuously flowing street fountains, and as the overspill from houses and baths. Imagine a town of almost 20,000 people with no sewers! Whether this water was coursing through the city, or the street surface was piled high with refuse and waste, there still needed to be a way to get across. In response, they built high curbs and raised blocks, illustrated by Dan doing his best Abbey Road impersonation:

I also learned that these stepping stones served another purpose: one stone meant that it was a one way street. Two stones meant it was a two-way minor street, and three or four stones indicated that it was a major thoroughfare. And there’s more! The raised sidewalks did more than keep the water in the streets: they also hid the lead pipes that were used to transport water throughout the city to feed both the public baths and fountains – and a few of the wealthy residents.

A well-worn fountain, with protective stones to keep wandering cart wheels at bay 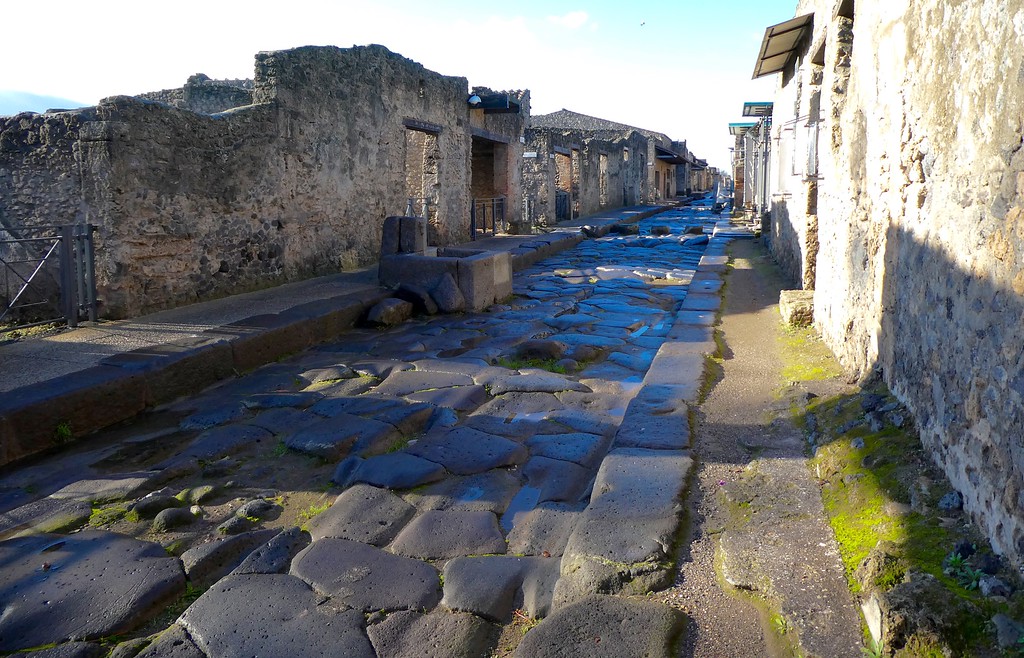 When visiting the Celtic ruins north of Portugal I learned that sometimes when buildings are restored, the archeologists will indicate where the original wall stood compared to the sections that have been reconstructed. I saw this method used here as well, with red bricks indicating sections of wall rebuilt in modern times. 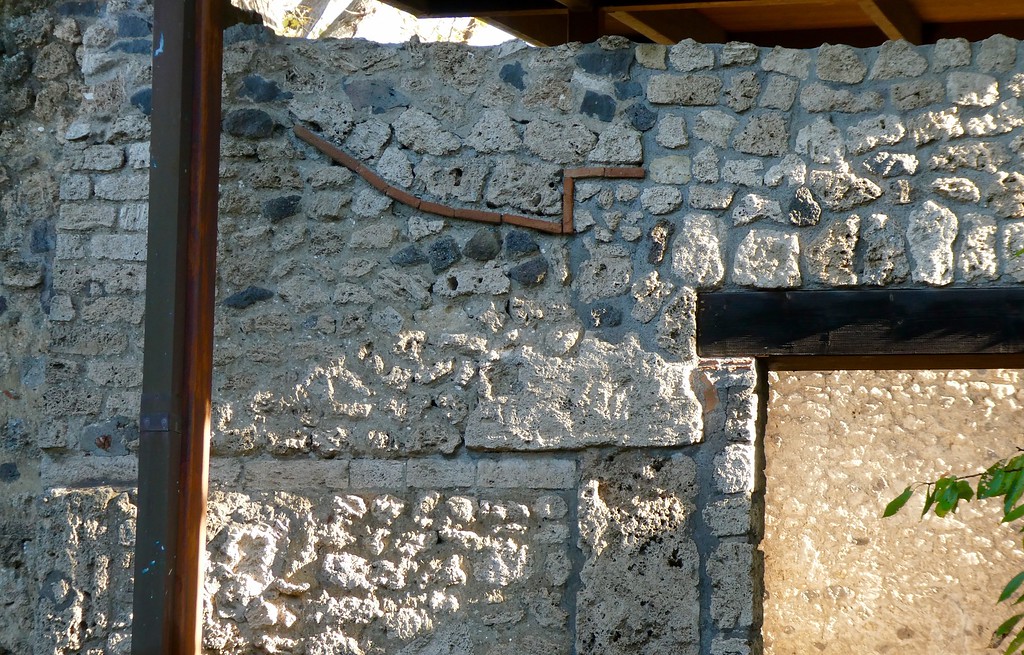 The murals were amazing. They were remarkable in their own right as works of art and decoration, but when one considers that they survived almost 2,000 years buried under 14 to 17 feet of ash and pumice, it is even more impressive to see them. Here are a few that caught my eye. 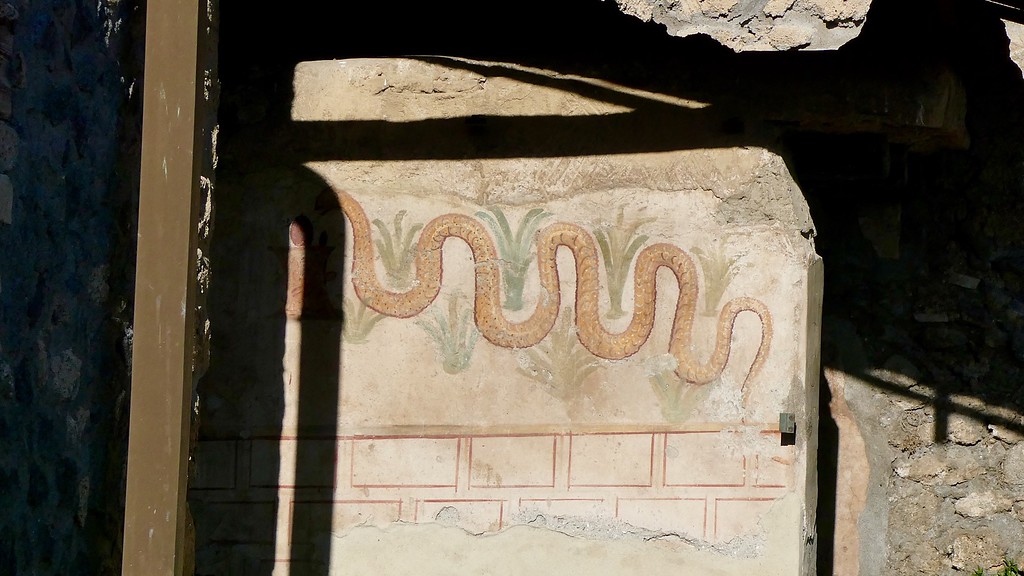 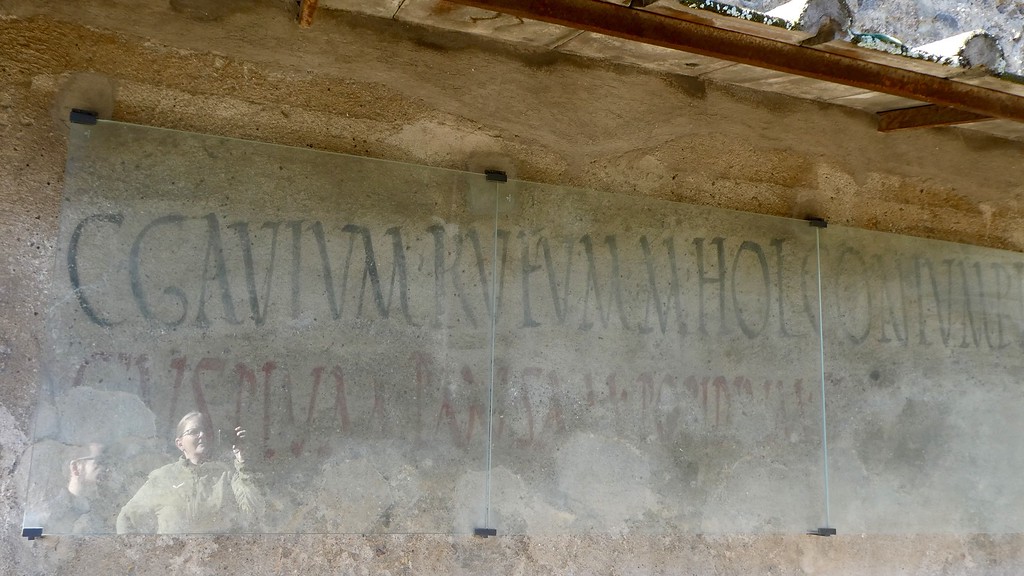 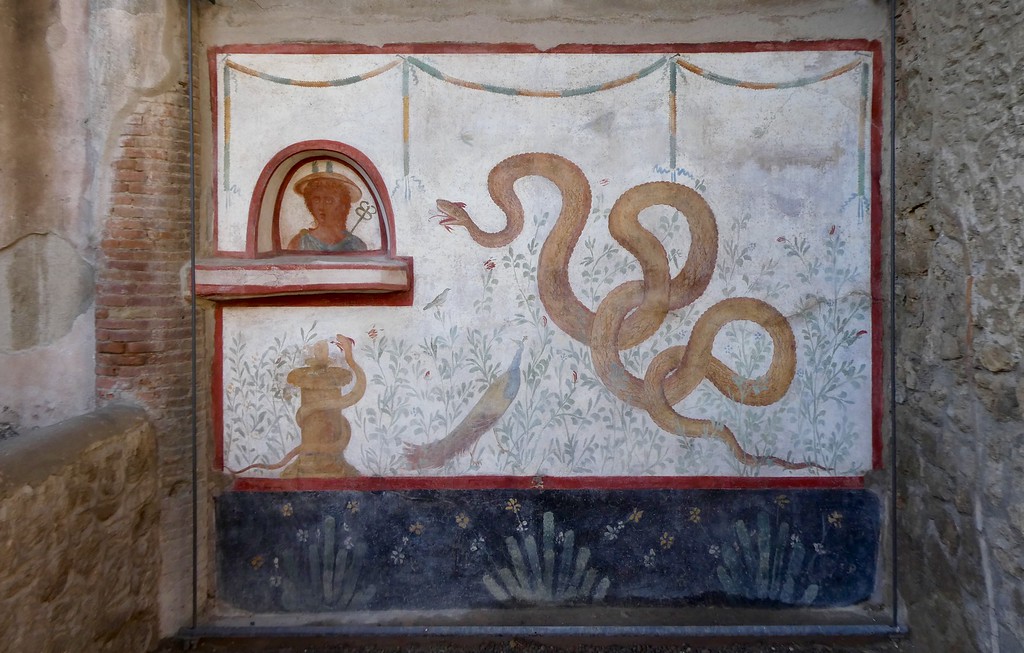 While the murals we saw in the park were impressive, it turns out that a large number of them have actually been removed from the grounds and are now housed in a museum in Napoli. I felt a little cheated, having come to Pompeii to see the artwork of Pompeii, only to learn that it was in another city.

And the mosaics! When I think of mosaics, I think of designs made with large, chunky materials, but the ones I saw in Pompeii were made with tiny little bits of stones and glass. Some of them were exquisite! And they were extensive, covering entire floors, even in larger rooms. 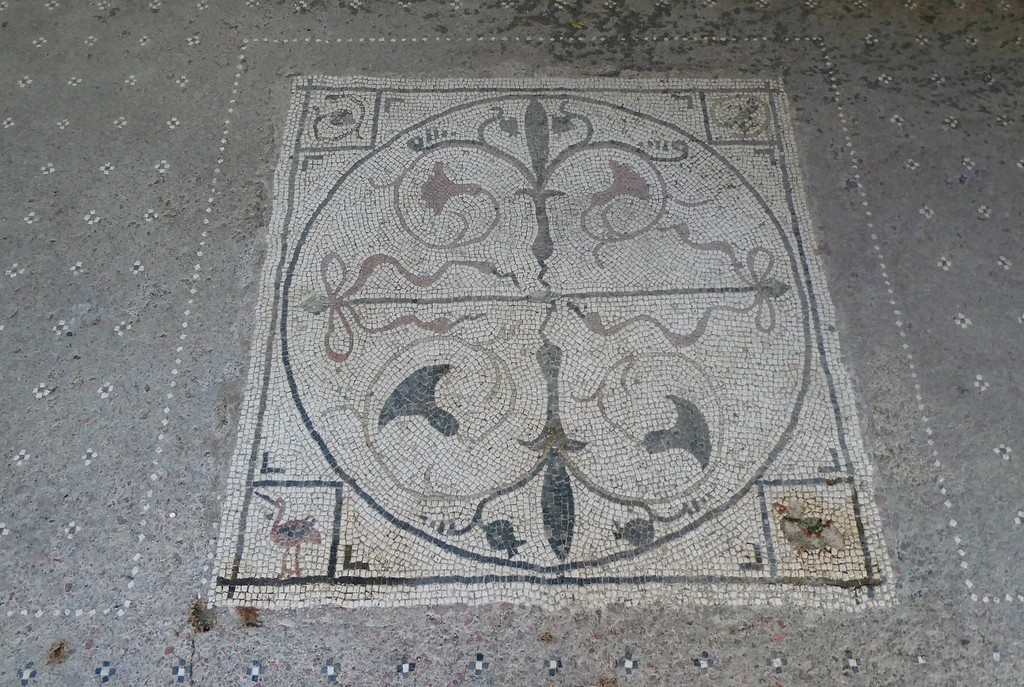 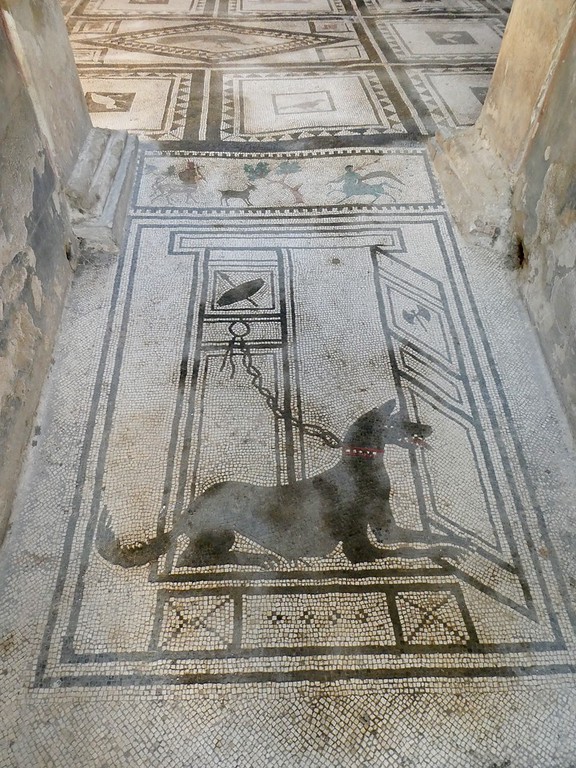 We had started our tour of the park furthest from the main entrance and, with time and our steady progression towards that gate, we encountered more and more people. Not overwhelming by any means, but enough to make me appreciate being here in the off-season. In addition, the heavy rain from last night had given the stones a rich, polished look that was slowly beginning to fade as the sun sucked up the moisture.

A stark reminder of just how quickly the volcano hit 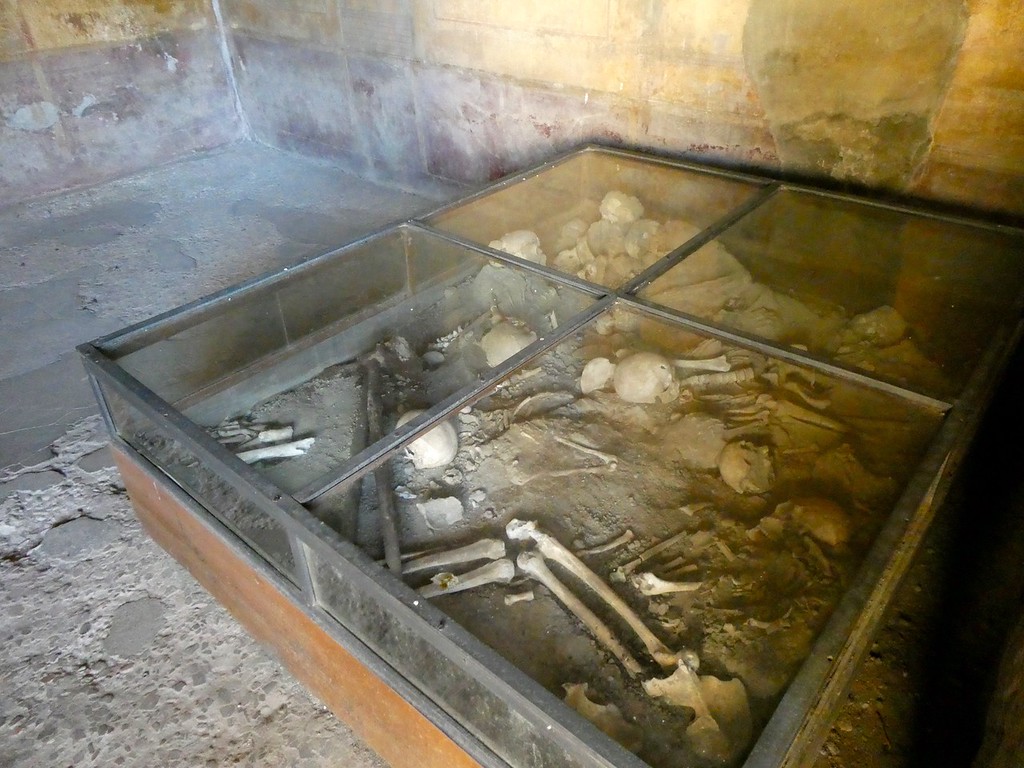 Sloped roof directs rain into an Impluvium, a sort of water catch-basin for household use as well as cooling the interior of the house 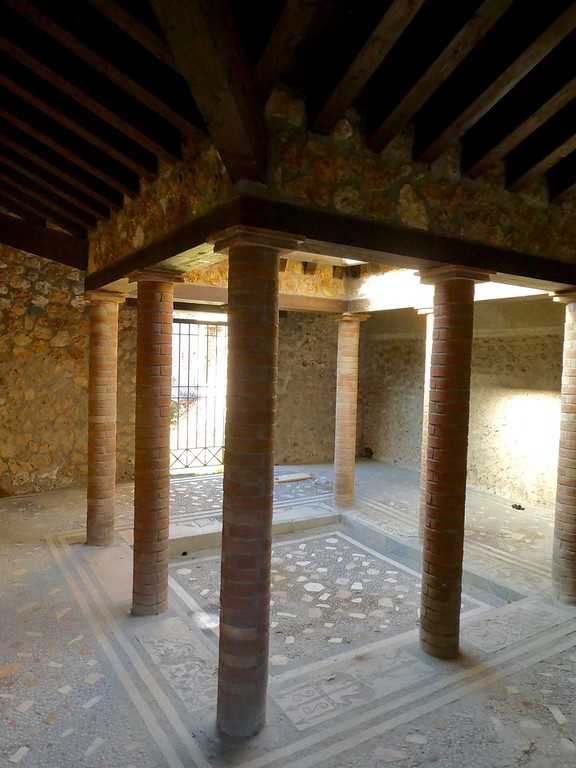 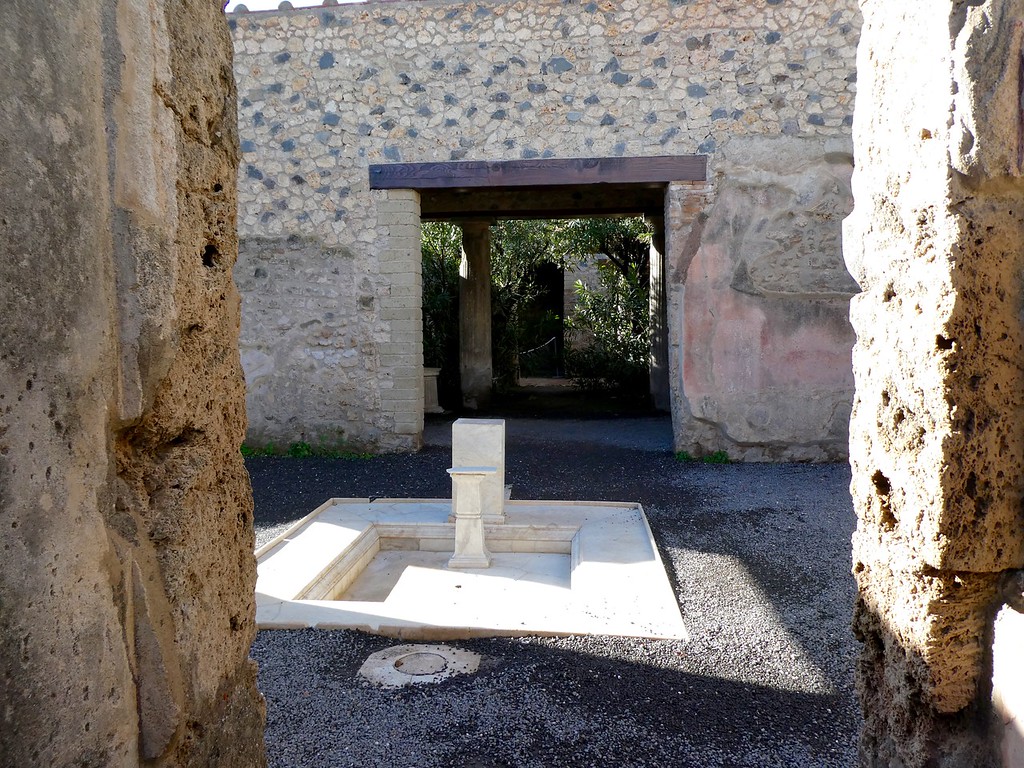 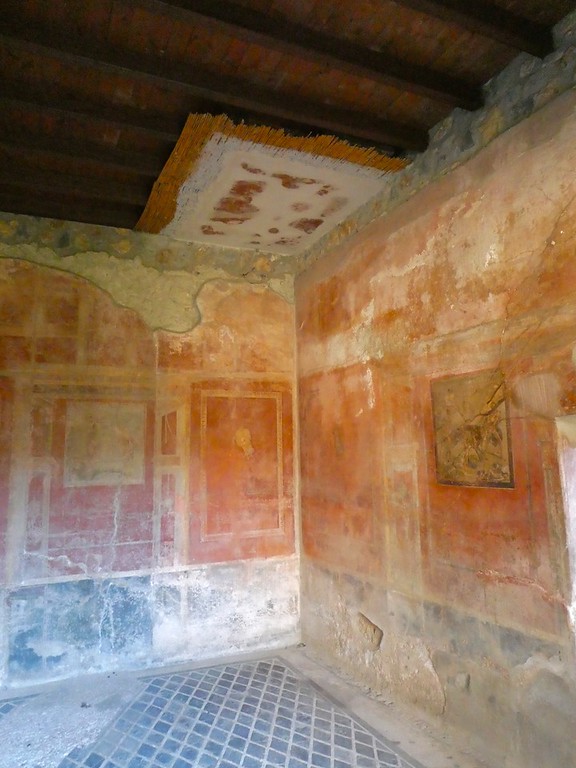 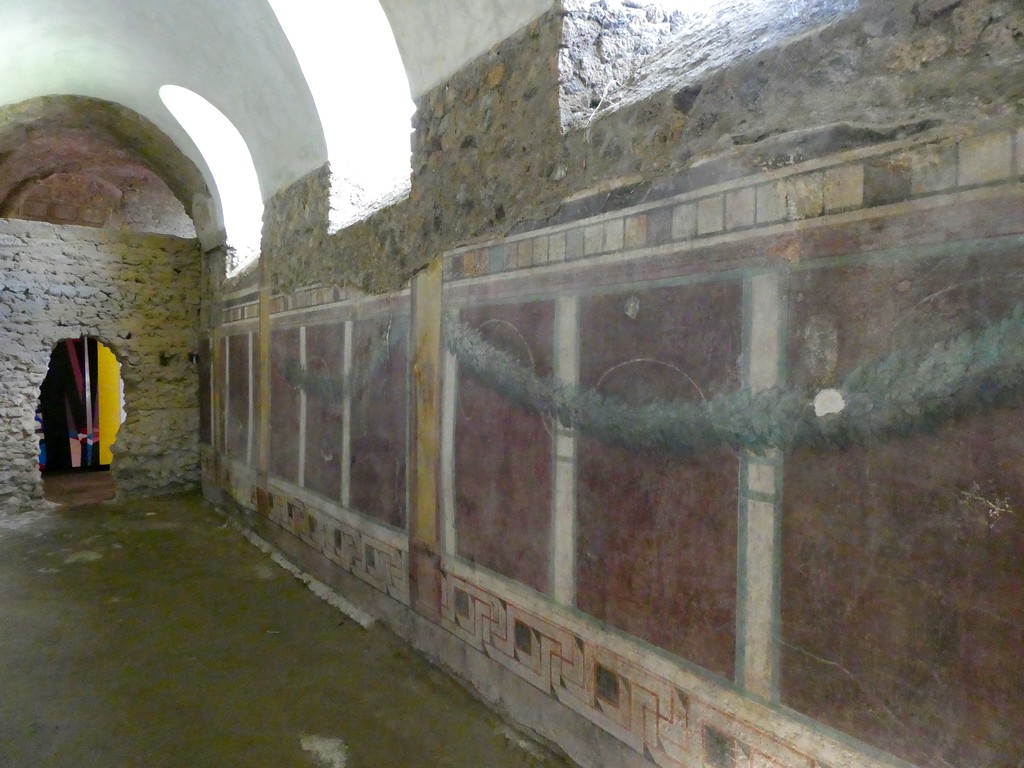 At one point I realized that while the ruins are interesting, and the preserved designs incredible, what I really wanted was to see a fully-intact house. If I had unlimited funds, I would pay to completely restore an entire block of buildings. Every detail, including dishes and plants and all of the vibrant colors that I am sure filled these homes and businesses, would be included. I have a good imagination, but sometimes I just want to really see something so I can better understand it. 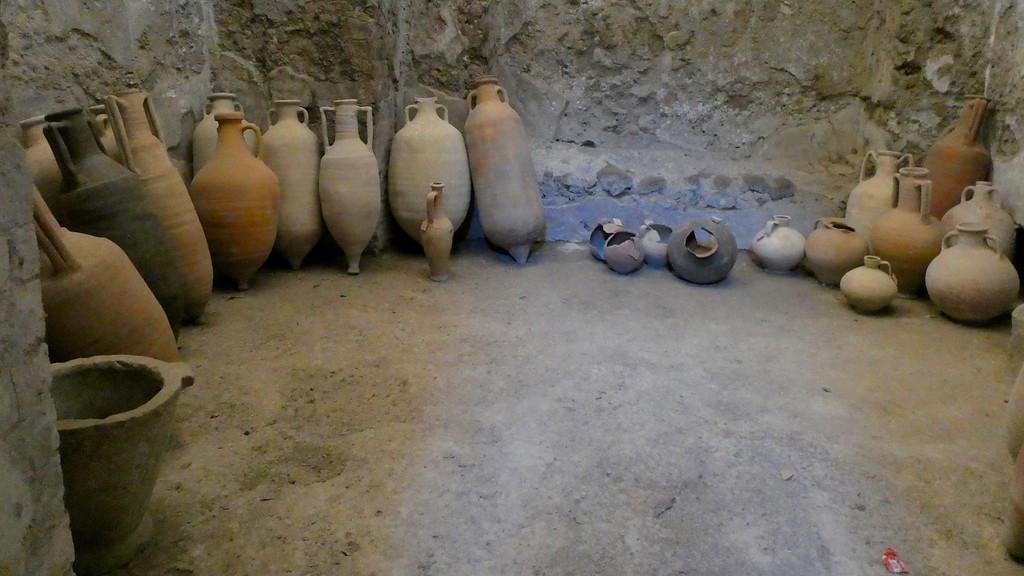 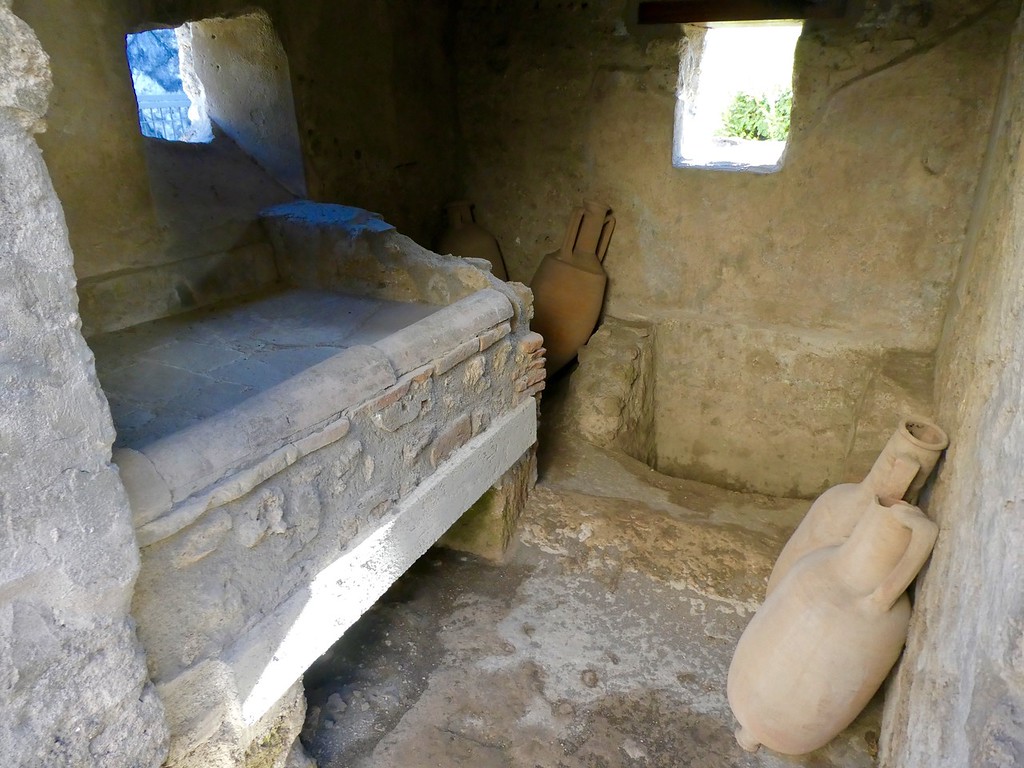 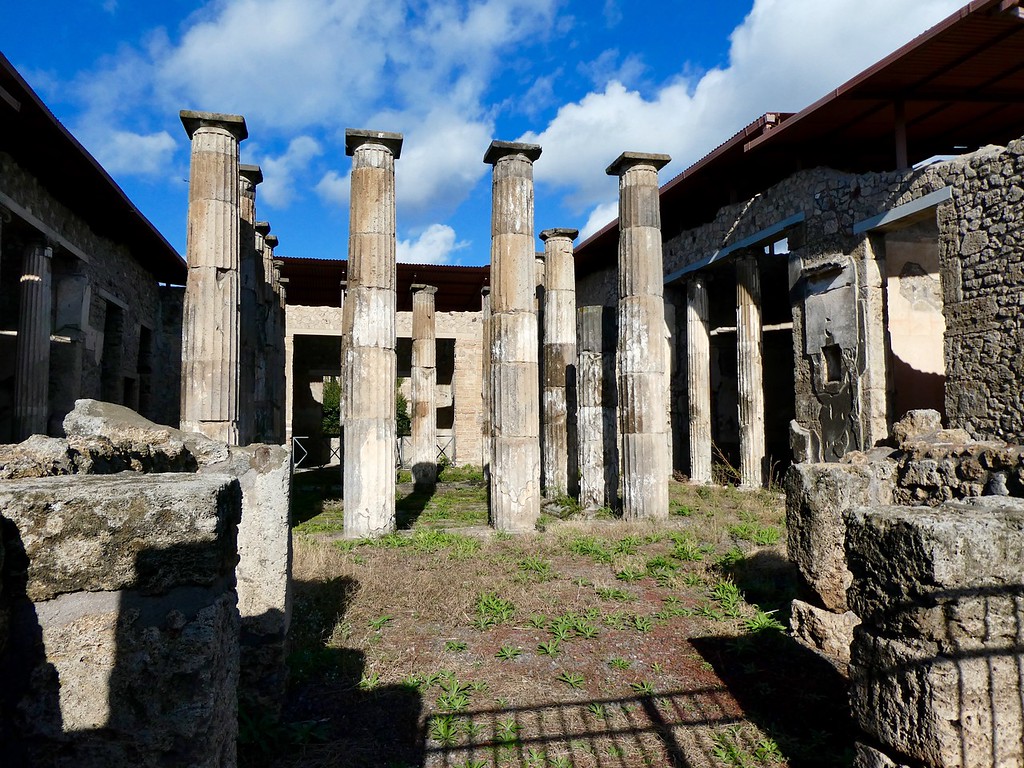 Vesuvius in the clouds 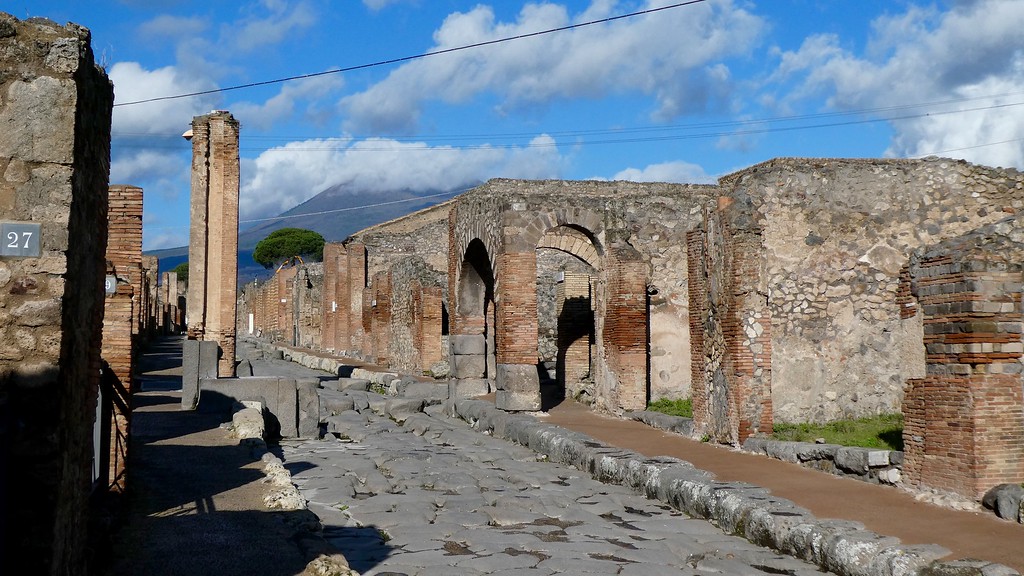 We had reached the more civic orientated area of Pompeii, where the forum, temples, theatres and other public buildings were clustered. There were more people and, much to my surprise, a restaurant! Oh well, better to be prepared than to go hungry.